This section allows you to view all posts made by this member. Note that you can only see posts made in areas you currently have access to.

Well, this one was bit of a curious one. Nothing happened on the field touchdownwise and after 1st half there was only 1 injury on the stats. MAD ones had started on offence and got to the scoring distance but then the Dark ones committed to getting ball out and that they did when every Serf was tied up and forced to block, leaving a chance for a ball-carrier blitz. The Elfs also almost scored a defensive TD but where stopped by unlikely butterfingery.

2nd half the skies opened and it started pouring down like the day before that cruising line owner from deep inland, you know the one, who everybody mocked "No, no, No-a not gonna sail" because the dude's name was Noa and he had started building a luxury yacht on the desert, you know the story, day before he finished that thing it started raining so hard that the desert flooded within a day and that dude made a fortune selling tickets to people who didn't want to drown, though rumour is that International Wizardry Union of Moisture and Percipation Control got a decent chunk of that loot, but I digress, as I said, it started raining. Which meant that the scoring play for the Har Ganethians thunked on the ground and started a contest of who could look the silliest trying to pickup the ball from the middle of mass of Dwarfs and Elfs. It was a tie, like the game itself.

Thanks again for the game Gnaarkill, pleasant affair like always. Sorry about that MVP hitting your hired star-player, that's always nasty.
#2

Quote from: Gnaarkill on August 01, 2022, 12:00:58 PMWe are not looking forward to the lab appointment prescribed by NUL officials.
Do we REALLY have to do this? Are you sure your scientist totally know what they are doing?

Well... by NUL-law I have to make the appointment, so here goes. When will the doctors be able to see me?

I'm afraid I really have no idea what those MAD folks are doing any time. They don't seem to play with any consistency. But they could have an appointment already today at 19.30 (or maybe bit earlier depending how fast Atte is - the Discord drawing of the groups for my RL BB group where Atte and Memofin also play is at 19.00 but I'll be ready right after I see who my vamps will be going against). How would that suit you, sir? 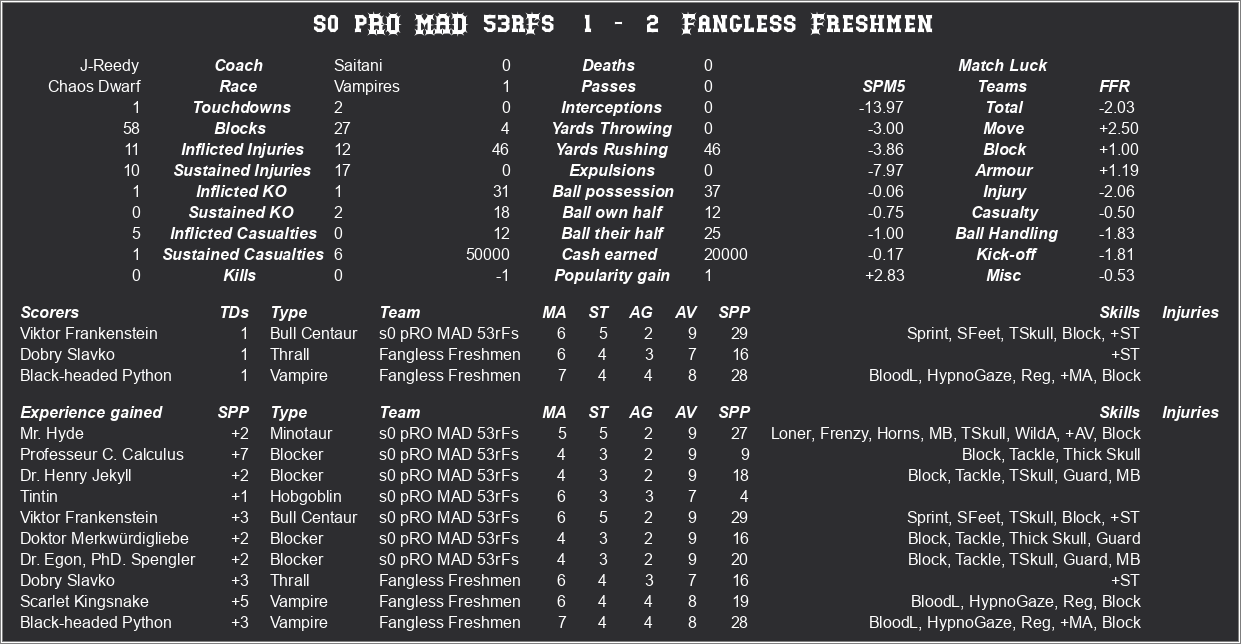 MAD Serfs continue their winless streak, this time getting manhandled by the snake handlers of Fangless Freshmen. Chaotic ones started on the offence but a backfield fumble gave the Freshmen time to break through and break through to the goal. Second attack was marred by a coaching mistake from the MADs and the Freshmen took in another defensive TD. Second half and the Freshmen got bad start with the ball landing close to line and star player William Chaney causing a turnover. MAD got pressure on the ball and managed to take it away and score but that took too long and the Freshmen had no trouble keeping the ball away on their second short attacking drive.

Great game from Saitani. Both sides had 1s coming up their wazoo, Vamps with the ball pickups and Bloodlust and Dwarfs with rerolling eating double-skulls. Deserved win for the Vamps.
#4

July 10, 2022, 04:36:45 PM
Ok, folks, match day has been forwarded and it's time for MD4. There is no hurry as at least one coach is away traveling and I'm guessing this is the busiest month for lots of folks with summer holidays. But play on, mates!

Saitani, I'm away for next week, working remotely, so I won't be available to play until the weekend of 16th-17th. If you have free time on that weekend and playing then suits you, sir, let me know and I should be able to plan for that. I'll know about the week after that weekend closer to end of next week.

Quote from: tags on June 26, 2022, 01:02:18 AMJ-R! I guess I have no choice but to face your vertically challenged killers. I'm gonna pull a Mr. B and say that I can play most days from 21. I can probably play earlier a lot of days on short notice (hit me up on Discord), but there are a lot of Disc Golf events going on these days.

All righty, back in action after an orienteering weekend, week of vacation with hiking around and midsummer weekend. Haven't had time to check the forums but seems I got back just in time. Looking at my timetables I could start at 21 on following days:
- Tuesday-Wednesday
- Friday-Saturday

Let me know if any of those suits you, sir. Also, I'm available today for whole day, I'll ping you at Discord in case it's too hot for frisbee golfing today.
#7


@Atte, I think the spp points from admins come after the round is validated as admin results can be changed as long as the round isn't validated.
#8

Hakos, I'm currently on quorantine, so lots of free time this week. Hopefully your work load is easing up. Let me know if any of following CEST start times suits you, sir:

I can play tomorrow Monday at 20:00 if thats still works for you.

Discord notifications for this season should work now, this message will show that to be true or not.

Looks like I get the honor of going against the champion. So, Lars, here are my OK CEST start times as far as I can tell:
- Monday/Tuesday/Wednesday 18-21
- Thursday 19-20

Let me know if any of those suits you, sir. This weekend is already booked and will know more about next weekend sometime during next week.
#11